Recently, while traveling to Seattle for a training session for some marketing executives, I thought about some of the funny things I saw happen on the plane. I don’t know, maybe I was just bored, but, I heard and observed some funny things, at least “to me”, when I was on the plane.

Realize that I fly a LOT so… All at once these things just hit my funny bone.

On comes a husband and wife, the plane is still nearly empty and they  stand right in the middle of the isle looking for the PERFECT seat. In the meantime, people are boarding the plane waiting and waiting for Mr. and Mrs. Perfect seat taker, to FIND their perfect seat.

Finally, the husband picks the perfect seat, and the wife, GETS him up saying no, “SHE DOESN’T WANNA SIT THERE”. IN the meantime, chaos is breaking out behind them as there is a line longer than the Equator waiting. Finally, they sit and now everyone is RUSHING to the back of the plane as if there is a gold fortune hidden inside the lavatory. Ay Carumba!!!

My favorite is when they talk about the oxygen masks falling in the event of cabin pressure change. “Just hold them over your face and breathe NORMALLY”. SERIOUSLY???????????????? Yeah, maybe once you stop SCREAMING… In the meantime, people are just snoring away… Sometimes I think I would be the only person on board who survives because “I” know where the EMERGENCE EXITS and LIFE PRESERVERS are.

The next time you’re on a plane notice these things and see if it doesn’t crack you up.

Researchers for the Massachusetts Turnpike Authority found over 200 dead crows near greater Boston recently, and there was concern that they may have died from Avian Flu.

A Bird Pathologist examined the remains of all the crows, and, to everyone’s relief, confirmed the problem was definitely NOT Avian Flu.

The cause of death appeared to be vehicular impacts.

However, during the detailed analysis it was noted that varying colors of paints appeared on the bird’s beaks and claws. By analyzing these paint residues it was determined that 98% of the crows had been killed by impact with trucks, while only 2% were killed by an impact with a car.

MTA then hired an Ornithological Behaviorist to determine if there was a cause for the disproportionate percentages of truck kills versus car kills.

The Ornithological Behaviorist very quickly concluded the cause: when crows eat road kill, they always have a look-out crow in a nearby tree to warn of impending danger. They discovered that while all the lookout crows could shout “Cah”, not a single one could shout “TRUUUUUUUUUCK!!!!!!!!!!!!!!!!!!!!!!!”
Amazing!

Do you remember when greeting cards were for Birthdays only? Now, it seems that due to immeasurable GREED, there is practically a holiday, special occasion, or a sentiment card that needs to be sent DAILY. What the HELL happened here???
I mean SWEETEST DAY…Come ON!!! OK, let’s be honest here, it was ORIGINALLY started with the candy company in order to increase business, BUT, the greeting card Co. took the lead and just ran with it.

Look, I like to be pampered and fussed over just like the next gal, BUT not on a frivolous made up holiday like that. Birthdays I can understand, anniversaries, OK, but WHERE does it end?
Just look at the “special occasion” cards they have out now:

Yikes, is there no end? Now, I’m not against making money, after all it IS the core of our economic structure, I’m just saying let’s have a little dignity here people. Try and make the cards you have unique, that way, people will keep buying them for their creativity, NOT their quirkiness for made up Holidays.

This is just a personal opinion, but I will interject it because I CAN. Why not stop a lot of these drippy and stupid POEM cards? For me, it takes the sincerity out of the card. Why not replace it with heartfelt sentiment and NO rhyme?
OK, keep SOME rhymes, but not to the extent the greeting cards co’s. have them now. I believe that if they DID this, they would be well in the black, and there would be no NEED to make up ridiculous holidays. Just my opinion. 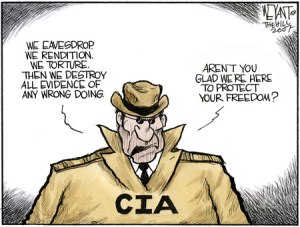 The CIA had an opening for an assassin.

After all the background checks, interviews

and testing were done, there were three

finalists: two men and a woman.

For the final test, the CIA agents took one

of the men to a large metal door and handed

instructions no matter what the circumstances.

Inside the room you will find your wife sitting

in a chair. Kill her.

The man said “You can’t be serious. I could

never shoot my wife”. The agent said, “Then

you are not the right man for this job.”

“Take your wife and go home”.

The second man was given the same

instructions. He took the gun and went into the

room. All was quiet for about five minutes.

The man came out with tears in his eyes,

The agent said, “You don’t have what it takes, so take

your wife and go home”

Finally, it was the woman’s turn. She was given

the same instructions: to kill her husband.

She took the gun and went into the room. Shots

were heard one after another. They heard screaming,

crashing, and banging on the walls.

After a few minutes, all was quiet. The door opened

slowly and there stood the woman, wiping sweat from

“The gun was loaded with blanks” she said,

I had to KILL him with the chair…