Just wanted to take this opportunity to express how much each and every one of you means to me. I hope all of you who celebrate Thanksgiving have a peaceful and  loving time tomorrow with your family.

We, in America, have many things to be thankful for. Before you carve that turkey, or eat your meal, please take a moment to remember all the things you are thankful for, and then EAT TILL YOU PUKE!!!

Hi there, my name is Tom, yup that’s right, Tom Turkey, go figure. For years, since the Pilgrims and Indians got together for that big Thanksgiving meal, it’s been rumored that they had one of my ancestors for dinner.

While I’m sure all you meat eaters out there are sayin’ Yuuuuuuup, let me just say that the FIRST Thanksgiving was PROBABLY more of a VEGETABLE dish. Food was scarce, and corn, wheat, beans, squash, and potatoes were the staple of the day, NOT ME!!!

Yes, yes, I know that since then people have been craving turkey every Thanksgiving, but I’m here to shed some of my OWN ideas. Why turkey anyway, we have a drug inside us called tryptophan. It seems after you eat us, all you wanna do is SLEEP…Is THAT how you wanna spend your holiday, I THOUGHT not.

Now Chinese food, I mean, who doesn’t like Chinese food, AND, it WON’T make you sleepy either. Sure, you may be hungry again in a half hour, so…EAT AGAIN. Or, I know, how about Italian Lasagna….Yuuuummmm… Look, all I’m sayin’ here is DON’T get HUNG UP on eating ME.

Let me just sit in my pen, and just gobble gobble away, happy as a clam…These are MY thoughts about Thanksgiving…Have a good one everyone…

This was my rendition to someone very special who just passed. He would always do these challenges, and THIS one, is a tribute to his life.

Thank you for all he good that has become my life.

The trials and tribulations thou has sent, have become my weapons, strength and resolve.

To thee I seek, but one thing, your everlasting love.

Bring me home into your glory, and may your light forever shine upon me.

I have a sticky question to ask you, hopefully you can help. My boss is a very nice guy who just loves to hit on women. The truth is, he is very good looking and all the women seem to go gaga over him.

Here’s the thing, his wife also works for him, but in the department where I work. Sooz, he has flirted with, and I know for a fact, he is having an affair with one of his secretaries.

I am good friends with his wife and don’t know what to do. Should I give her a heads up and let her know what’s happening, or should I just keep it to myself and let it fester? I am really torn here Sooz, can you help me?

Keep your cotton Pickin’ nose out of THEIR business. For all YOU know, maybe SHE is having an affair also, maybe they have an “open marriage”, MAYBE they are separated.

Your job is to BE there for her IF and WHEN things hit the fan, PERIOD. It is not YOUR responsibility to be the busy body and possibly the one who breaks up a marriage.

I realize this may be hard for you, but if you blow the whistle, and something goes awry, you maybe be losing a good friend over this as well as your job. Remember the old Navy saying: “Loose lips, sink ships.” Good luck.

6:00 AM and the alarm clock blared like a fire bell. Just yesterday Bill would have gotten up, dragged a comb across his balding head, dressed, and then headed off to work.

After 44 years on the job though, Bill had paid his dues, he decided to turn off the clock and go back to sleep. Right there beside him was his trusted pup Sam looked dazedly at Bill as if to say WHAT, why so early?

With the alarm turned off, both Bill AND Sam laid their heads back down, and drifted back to sleep. At ten, Bill rose from his sleep while Sam, not eager to move from his nap, decided to get extra twenty winks.

Bill had gotten Sam just a week before he retired; an unexpected trip to the SPCA yielded him the cutest little puppy he could ever imagine. Sam just adored Bill, they played together, Bill took him on walks, and even cut his nails when they were getting unruly.

The years passed, and the good time just kept on coming. This night, however, Bill didn’t seem like his usual self-thought Sam. Sure, he had fed him, and taken him for a walk after dinner, but his demeanor was just not his usual self.

Bill would usually pet him over and over as they were watching TV in bed. Tonight, however, he would only stroke him sparingly, as Bill fell asleep on and off. He finally gave Sam a good night pat, told him he loved him, and then hit the pillow.

The next morning, the alarm went off, and Bill did not turn it off. It just kept ringing and ringing, disturbing Sam’s peaceful sleep. Why isn’t Bill getting up to feed me Sam thought? Why isn’t he taking me out for a walk?

With no response from Bill, Sam got up and went to lick Bill’s face, nothing. Later that day, a multitude of people came to the house, Sam didn’t understand that Bill had passed away and they were taking him to the morgue.

Where is Bill going Sam thought, who will feed me, play with me, and take me out? Who will love me? Sam, sad about his buddy being gone, climbed on the bed and just lay down and howled out in a shrieking cry.

The neighbors tried to take him, but he just lay there in sadness, waiting for Bill to return. They tried feeding him, but he refused to eat or drink. The SPCA had to be called to take him away.

Sam lay in his cage, tail down, and with the saddest eyes you would ever see. He refused to eat, and after three weeks of doing everything they could, Sam died.

It was decided that he be buried with his longtime friend. Finally, he and Bill were together, sleeping peacefully in their new home, together again.

I have a bone to pick with all of you who just CAN’T be quiet during a movie. When I go to the movies, it’s all about RELAXING.

This is extremely difficult to do when YOU are reviewing the entire movie with your friends ALOUD. I’m sure you are all great movie critics and just can’t WAIT to scurry home and write all about it, BUT, just SHUT THE HELL UP while the movie is PLAYING.

I was attending the James Bond Thriller the other night, and two of you ladies, probably over 100 years old, were there also, expressing your thoughts verbally, and NOT in an “inside” voice. “Oooooowww, and Ahhhhhh, and shouting, “LOOK OUT JAMES”…

By the way, James can’t HEAR you. Not only is he TOO busy staying alive, he is in a MOVIE and NOT in the REAL world. Although, I must say, I don’t believe that YOU are in the REAL world EITHER.

Let’s review…Movies = Quiet time. This is NOT to be confused with Cult movies like The Rocky Horror Picture Show, where everyone is repeating lines as LOUD as they possibly can, and getting up on stage to act out the movie.

There are soooooo many ratings already, I just HOPE we don’t have to have one that says “Shut the Hell Up” with an “STHU” rating… Please be respectful and let ALL the OTHER movie patrons enjoy the movie WITHOUT YOUR verbal comments. Thank you.

Subject: This guy wrote an amazing Craigslist ad when his girlfriend wanted him to get rid of his dog:

My girlfriend does NOT like my beagle Molly. So, I have to re-home her. She is a pure-bread from a wealthy neighborhood, and I have had her for four years. She likes to play games, but she is not totally trained.

She has long hair, and is a little bit high maintenance, especially when it comes to her nails being attended to. She stays up all night yapping, but sleeps while I’m at work.

Let it be known that she ONLY gets the best, most expensive food. The problem is, she IS lazy, and will never come and greet me at the door after a hard day, or give me the unconditional love I need when I’m down.

She doesn’t BITE, but, she does have her moments and can be mean as HELL.

So…If anyone is interested in adopting my 30 year old, selfish, wicked, gold digging girlfriend, come and GET her. My DOG and I want her re-homed ASAP!!!

Yesterday, I offered folks to write a poem or story regarding this picture. Sadly, no one responded. Today, I give you MY rendition of “The Tree of Desire”… 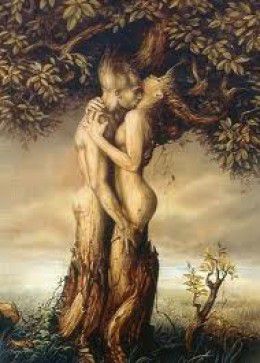 Once we shared a love so strong,

Consumed by lust, and understood the wrong.

Caring not, our selfishness grew,

Till attention it gathered, from those who knew.

Warned were we not, from the gods up above,

To desist from desires flame, and practice TRUE LOVE.

We laughed, and we scoffed, at the gods rambling warning,

Until we woke as a tree, the very next morning.

Write a poem or story using the picture as a refreence. Send me the link so I can read it….I am writing MINE now….Be creative….GO!!!!!