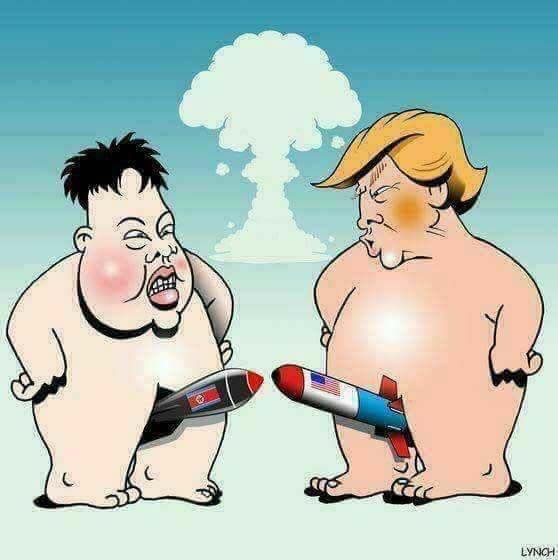 OK folks, this is getting humorously ridiculous now, first Kim Jong UN calls Trump a “dotard” (A senile old man), THEN, Trump tweets back and calls HIM a “madman”. Seriously folks…I have heard more SERIOUS retorts on a fifth grade playground.

It is totally OBVIOUS what the two little boys are doing…They are playing, who has the bigger WONG. Being an experienced mediator, I have a perfect solution for all this rhetoric.

The answer folks is simple, let’s have them whip out your SCHLONGS, get a tape measure and measure them. Whose ever is the longest, then gets to decide how long the Human race should continue.

Seriously, does it REALLY take a genius to realize that in the event of a Thermo Nuclear War there will be NO winners? Nuclear winter would occur, which would block out the sun’s rays for YEARS, ultimately Damming the third planet from the sun.

I say again, “What is WRONG with these two Bozos?” Here’s the rub, they are BOTH supposed to be intelligent people. Really, ask them, they will tell you ad-nausea.

Even those folks who were originally Trump supporters, are now dropping him like flies the more he opens his mouth. I suggest we place Ivanka in his place. Not ONLY would she make a good President, we could probably buy her “line” of clothes and jewelry cheaper.

Oh well, we have to play with what we were dealt I guess. Hopefully, in the next election, if the two current leaders don’t annihilate us, hopefully we will see through the rhetoric, and decide by knowing more about them, other than what they TELL us. Fingers crossed.