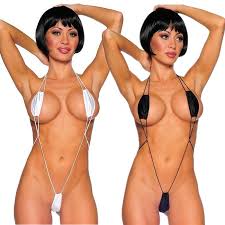 HOT!!! That is the word of the day. It is 107 degrees here in Phoenix. I have just melted my pants off.  🙂  (Just a nice thought for all of you)…Dot and I have been playing games all day in the beautiful air conditioning.

We started with strip poker; I won, and then went on to playing gin rummy. About now, neither one of us are capable of concentrating on anything though. Maybe we should do a nice skinny dip in the pool for a second, and then right back in the air.

By the way, today is National Bikini Day. Ladies, don your best 2 piece suits and get out there and tan. Make sure you are wearing an SPF sunblock of about 2000 as the sun is hotter than Hell. Take a dip, order your favorite libation, sit back and relax, you deserve it.

Oddly enough, even though Bikini Day is celebrated nationally, it never even started here in the States. It was first displayed on the beaches of Paris France on July 5th. 1946. The very first bikini was made of just 30 sq. inches of fabric. Since then it keeps getting less and less. I say, skip the suit all together and show off what the good Lord gave you. That’s why you have them, flaunt them.

“At first, Spain and Italy banned bikinis at beaches

Movies have been made immortalizing the Bikini: How to Stuff a Wild Bikini, with Annette Funnicello

St. Tropez claims to be the bikini posing capital of the world.”

Other interesting facts are: