I would like to wish everyone a Happy Fourth of July. Today marks a day that as Roosevelt said, “Will live in infamy.”  While we wear masks, social distance, and see thousands upon thousands of people dying due to the Covid-19 pandemic, we get ready to celebrate our heritage.

I pray that all people who celebrate this day celebrate “smartly”. Please social distance and “wear masks.” Is it worth the risk to gather in large crowds, ignore wearing masks, and run the risk of acquiring this dangerous disease? Please folks; this is NOT just the flu, It is wide spread, and extremely dangerous for ALL ages.

While fireworks is a National celebration, in MY opinion, it would be better to watch previous fireworks displays on TV, Bar B Q on a small scale with a few friends and family that you know are safe, and enjoy the holiday with good food, conversation, oh, and perhaps a little libation.:-)

Hmmmm… I seem to sound like a little bit like Dr. Fauci don’t I? Hey, I just don’t want ANYBODY dying unnecessarily. Let’s get real here, without an audience who reads me, what’s the point, RIGHT?

Have fun everyone and remember this…Our forefathers dyed not in vein, but to bring about the freedoms we many times take for granted. Let us honor the fallen and the brave, and dedicate our freedom to their honor. Happy Fourth… 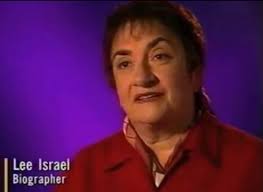 I just finished watching the movie ‘Can You Ever Forgive me’ starring Melissa Mccarthy, and I actually had mixed reviews.  First off, Mccarthy was wonderful in this movie, The REAL character, Lee Israel, not so much.

Here was a woman who finished both High School and college, and decided to become a writer. In and of itself, THAT is OK, what bothered me was that she became an alcoholic.  After SOME success, she turned to letter forgery in order to make a living.

In the 60’s and 70’s, she freelanced for some of the top magazines in the country.  In the late 70’s and 80’s, she wrote biographies of famous people. Her best works were of Tallulah Bankhead and  Dorothy Kilgallen, where Kilgallen rose to number 15 on the New York best sellers list.

After that, with her alcoholism raging, she dropped off the grid, fell into a depression and couldn’t focus her brain on writing ANY books or articles. She literally had gone from a semi successful writer, to a woman on Welfare who was starving.

In order to get by, she wrote forgeries of famous peoples letters like Ernest Hemingway, Fanny Brice, Dorothy Parker and, Noel Coward. This was very lucrative for a year and a half until the FBI caught up with her and ended a promising career.

She was a lucky woman however, and only received a  6 mo. in house stay, and a 5 year probation stint. While on probation, she wrote her own novel of her deceptive life practices.

It turns out that she had written over 400 forged letters and had made thousands of dollars. My question…Should she have benefited from this book, OR, should the money have been paid BACK to those she had duped? You be the judge!!!

I have been in sales for years, and I must admit, I’m a pretty damn good closer. Selling, whether it’s in your profession, or even in everyday life trying to win an argument is very easy IF you know the secrets.

I’m hearing some people say “WHAT???”, but it’s true, closing effectively is all about SKILL and not just winging it. Let me show you.

It’s all about people. First, you have to size them up and see what type they are. There are basically 3 different types of people:

Remember, these should be used as a guideline, once you figure out which type of people they are, the REST is easy. Good luck…