I was reading various blogs the other day and I came about these 10 questions about cats. They of course had DIFFERENT answers but I liked MINE better. I hope you enjoy MY responses.

1. What religious festival is popular with cats everywhere?—None, ALL cats are Atheists. Obviously you don’t know much about their Religious Convictions.

2. What is the country popular with cats?—Katmandu of course.

3. What is the capital of their native country—Catness City

4. What is the name of the first Cat Dynasty?—The Meow Dynasty

5. What is the political leaning of many cats?—They don’t lean. They are well balanced animals. i.e. Agile as a cat.

6.  How most cats travel?—On Catamarans…

7.  What is it called when your person runs out of catnip?—DETOX—

8.  A favored name for male kitten?—What do I LOOK like a cat naming LEXICOGRAPHER??? Oh OK…OK…SOUR PUSS…

10. What a feline domicile is called?—A window sill, the TV, a crate, your bed, The list just goes on and on ad infinitum…I have a good one here I just can’t USE it…Hehehehe… 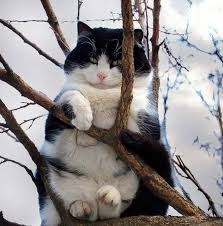 1.    Yell “Here Kitty Kitty”, odds are the cat will just look down at you and be thinking “SERIOUSLY, that’s the best you got.”

2.     Climb the tree…BZZZZZZZZZZZ….By the time you GET there IF you don’t fall and get a concussion, like I did, the cat will just climb higher and say “F**K YOU.”

3.    Shaking a box of cat food at it and saying, “Look what Mommy has for you Snowball.” The cat’s in a tree where all the FREAKIN’ birds go…He can just grab his OWN lunch.

4.     Hold another cat up and show it to him, maybe he’ll wanna mate? Be careful with this maneuver however as you may find yourself with 2 cats up a tree.

5.      Call the Fire Dept. Hehehehehe…SERIOUSLY???? Do you have ANY idea what that would cost the taxpayers. Not only that, but, do you REALLY think the Fire Dept. will come toot suite? BZZZZZZZZZZZ…Here’s a clue; your cat may DIE of old age first.

6.      Throw something at it and try and scare it out of the tree. Yeah RIGHT…I’D come down if someone was throwing stones, sticks, etc. at ME…

7.      Sing Three Blind Mice to the cat. Maybe he will hear the soothing music about Mice and just climb right on down.

9.      Alright, THAT’S it…I’m out of ideas here. Just go and rent a freakin’ Cherry Picker, get a hook and grab that smart ass cat.

Trying to give your dog or cat a pill is like trying to get a 100 year old man’s penis hard. Sorry…The devil made me type that…REALLY!!!. Damn…Now I lost my train of thought, Oh yeah, giving dogs or cats pills.

This subject has been widely studied by many successful vets across the world, and to my knowledge, there STILL is no easy way to make this happen. Oh sure, you might have a dog or cat that is a stupid as toast and just eat it, but usually, this is NOT the case.

The more widely accepted phenomenon is that the animal will turn their heads like in the Exorcist, spit and then, start cursing at you. I know, I know, none of us likes to be cursed at, especially by our family pets, so we have to think of inventive ways to administer said medicine without all the drama from Peyton Place.

The following, are ways that after many many years of study seem to work rather well.

1.)   BEG like HELL… Sometimes this works because your pet just likes to feel superior to you, and will just swallow it to show you that HE is the boss.

2.)   Put it in his food. This USUALLY works unless your pet is as smart as Einstein, in which case, he will eat all AROUND the pill and then stare at you as if to say…SERIOUSLY???

3.)   My personal favorite is to use distraction. For example, yell at the top of your lungs, “LOOK…There’s a CAT”, Then, as he starts to bark, put the pill in his mouth. This method however, doesn’t really work that well on cats, because number one, they are smarter than dogs, and two, they DON’T bark.

3.)   Acquire a blow gun, put said pill into it, and then BLOW like an Aborigine hunting the White man. This method certainly DOES work, but, finding the blow gun is tricky.

Last but not least, this is the one that seems to work the best. With two fingers, hold his nose until he HAS to open up his mouth for oxygen. You can then insert the pill WAY down his throat, and then remove your fingers from pinching his nostrils. This will usually do the trick.

Once your dog/cat regains consciousness, Give him several well deserved hugs, and of course, lavish him with copious treats. I hope this has been a help to you.