Back in the 1840’s, the word “Hallo” first arrived. It came from many different languages with this spelling, minus some adornment above certain letters, but ultimately it was used to bring attention to someone or something.

Today, we know this word as Hello, a greeting when you pick up the telephone. Thinking this was kind of a boring word, I seldom use it in my vocabulary. Personally, I prefer “What’s up” as opposed to Hello.

That probably once again is just my rebel side showing. I have never been one to just follow that straight and narrow line; I question everything and then choose my own path.

At one point in time, instead of saying Hello, folks used to say “Ahoy” as the greeting when answering the phone. This is a nautical term used as a greeting. Thomas Edison, however, wasn’t happy with this term, so by the 1890’s and after a few letters were written; Hello became the official term used to answer a phone.

Don’t let the humdrum masses of society tell you what to do, join me, answer your phones with a YES, What’s up, Maggie speaking, or just Ahoy Matte, let’s show them who has the REAL power.

Thomas Edison started it, now it’s OUR turn to FINISH it!!! Who’s with me???

WINDOWS: Sorry, the password must be more than 8 characters.

WINDOWS: Sorry, the password must contain at least one upper case character.

WINDOWS: Sorry, the password cannot use more than one upper case character consecutively.

50 shades of grayish
He was in ecstasy, with a huge smile on his face  as his wife moved forwards
then backwards, forward then backward, again and  again.
Back and forth, back and forth, in and out, a little to the  right, a
little to the left, she could feel the sweat on her forehead, between her breasts, and
trickling down the small of her back, she was getting
near to the end.
Her heart was pounding, her  face was
flushed, she moaned, softly at first, then began to groan  louder.
Finally, totally exhausted, she let out a piercing scream
and shouted; “OK, OK, you smug bastard, I  can’t parallel
park, YOU do it!!!!

>ONLY A GRANDMOTHER WOULD KNOW…

>> One day my
> Grandma was out, and my Grandpa was in charge of me
> .
> I was maybe 2-1/2 years old. Someone had given me a little ‘tea set’ as a gift, and it was one of my favorite toys.a
>
> Grandpa was in the living room engrossed in the evening news when I brought him a little cup of ‘tea’, which was just water.
>
>
> After several cups of tea and lots of praise for such yummy tea, my Grandma came home.
>
> My Grampa made her wait in the living room to watch me bring him a cup of tea, because it was ‘just the cutest thing’!
>
> Grandma waited, and sure enough, here I came down the hall with a cup of tea for Grandpa, and she watched him drink it up.
>
> Then she said, (as only a Grandma would know),
>
> “‘Did it ever occur to you the only place she can reach to get water is the toilet?

Like Loading...
Why are we so obsessed with time? No matter where you go, that’s all you hear about. Time is money, I don’t have time, time is running out, I’m killing time, don’t waste my time, etc,etc,etc…
Everywhere there are clocks, watches, and every other thing known to man to be able to “Keep the Time.” My question is…WHY??? Do you think that the Universe is keeping track of US…NO!!! So why then, are we so time driven?
We can’t DO anything about it, we can’t CHANGE it, make it STOP, Slow it down, TRAVEL through it, or for THAT matter, even be sure if we have the CORRECT time, so WHY BOTHER???
Life will go on WITHOUT keeping time. We will still get older, Night will STILL become day, and the Universe will just happily and merrily roll along WITHOUT us timing it.
Think about THIS, I say we give up our watches, hide the clocks, and just go with the time that Nature has us set on. No more scheduled 40 Hr. work weeks or longer, no more getting up at 6, 7, or 8, and RUSHING like madmen/women to get to work.
I say, we get up when we feel rested, work until either the job is completed, OR we are tired and need rest. NATURES way!!! This way, the job will STILL get done, AND, you won’t get all stressed out because you had to DO it by a certain TIME.
In doing this, we will all be less stressed, more well rested, and better functioning Human beings. Think about it, Nirvana…Now doesn’t THAT sound a lot better than what we are doing now? Less stress, less medical problems, less drugs, just more time to sit back and enjoy life as it should be. Ohhhhhhhhmmmmmmmmmmm!!!!!!!!!!!!!!
Sorry, but I have to cut this blog short because I have a meeting in 10 Minutes…Live long and prosper everyone…MUAH!!!
Until Later…

Like Loading...
Silvio, an 80-year-old Italian goes to the doctor for a check-up. The doctor is amazed at what good shape the guy is in and asks, ‘how do you stay in such great physical condition?’
Italian golfers…
‘I’m Italian and I am a golfer,’ says Silvio, ‘and that’s why I’m in such good shape. I’m up well before daylight and out golfing up and down the fairways’.
‘I have a glass of vino, and all is well.’
‘Well’ says the doctor, ‘I’m sure that helps, but there’s got to be more to it. How old was your Father when he died?’
‘Who said my Father’s dead?’
The doctor is amazed. ‘You mean you’re 80 years old and your Father’s still alive. How old is he?’
‘He’s 100 years old,’ says Silvio. ‘In fact he golfed with me this morning, and then we went to the topless beach for a walk and had a little vino and that’s why he’s still alive. He’s Italian and he’s a golfer, too.’
‘Well,’ the doctor says, ‘that’s great, but I’m sure there’s more to it than that. How about your Father’s Father? How old was he when he died?’
‘Who said my Nonno’s dead?’
Stunned, the doctor asks, ‘you mean you’re 80 years old and your grandfather’s still living! Incredible, how old is he?’
‘He’s 118 years old,’ says the o), (ld Italian golfer.
The doctor is getting frustrated at this point,
‘So, I guess he went golfing with you this morning too?’
‘No, Nonno couldn’t go this morning because he’s getting married today.’
At this point the doctor is close to losing it. ‘Getting married? Why would a 118 year- old guy want to get married?’
‘Who said he wanted
to get married?’ 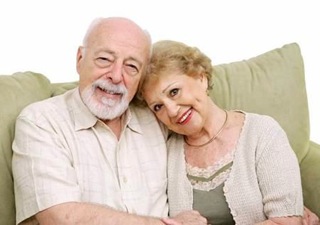 Just because someone doesn’t love you the way you want them to,
doesn’t mean they don’t love you with all they have.
Ralph and Edna were both patients in a mental hospital.
One day while they were walking past the hospital swimming pool,
Ralph suddenly jumped into the deep end.

He sank to the bottom of the pool and stayed there.

Edna promptly jumped in to save him.
She swam to the bottom and pulled him out.
When the Head Nurse Director became aware of Edna’s heroic act
she immediately ordered Edna to be discharged from the hospital,
as she now considered her to be mentally stable.

When she went to tell Edna the news she said, “Edna, I have good
news and bad news. The good news is you’re being discharged,
since you were able to respond rationally to a crisis by jumping in
and saving the life of the person you love. I have concluded that
your act displays sound mindedness.”

“The bad news is, Ralph hung himself in the bathroom with his
bathrobe belt right after you saved him. I’m sorry, but he’s dead.”

Edna replied, “Ralph didn’t hang himself, I just put him there to dry.

How soon can I go home?”  Happy Mental Health Day!

You’ll read anything as long as it is about sex. You need help!!